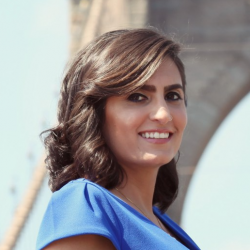 Tina Aswani Omprakash is a Functional Gastrointestinal and Motility Disorders (FGID) patient and health advocate based in New York City. She has had FGIDs for as long as she can remember and has had numerous surgeries due to her Crohn’s disease.

Tina maintains a blog and advocacy platform called Own Your Crohn’s (http://ownyourcrohns.com) and recently co-founded IBDesis, a community for South Asians living with inflammatory bowel disease (IBD). Her overarching aim is to normalize the rhetoric around digestive ailments in order to help diverse groups of patients own their ailments to live fuller, happier lives.

Tina is pursuing her master’s degree in Public Health at Mount Sinai’s Icahn School of Medicine. Additionally, she has spoken at many premier gastrointestinal (GI) conferences, does freelance work for non-profits, ostomy manufacturers, pharmaceutical and digital health companies. Her aim is to help companies recognize disparities and unmet needs in minority health populations.

The Crohn’s & Colitis Foundation recognized Tina in 2021 for her phenomenal leadership and powerful impact on the IBD community with the Above & Beyond Volunteer Award. Tina’s blog was also recognized as a 2020 Best Blog by Healthline and she was awarded the 2019 Healio Gastroenterology Disruptive Innovator Award by the American College of Gastroenterology for moving the needle on GI care for patients.