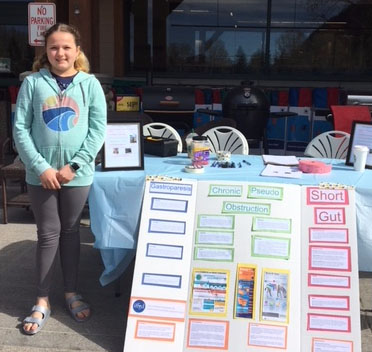 “Mom, get in here now,” Leo screamed. I ran up the stairs behind her and saw my sister, Madeline, having a seizure. My mom’s face was struck with fear and worry. My big sister was shaking uncontrollably. I felt terrified of what might come next.

“Call 911,” my mom screamed. I remember being so scared. I thought to myself: this might be the last time I see her. When the ambulance arrived, she was still seizing.

“Is she going to be okay?” I asked them. They didn’t answer. I am so worried, but I know that there is nothing I can do now. I know I have to leave it to the first responders and the doctors. I watch in a quiet fear as the paramedics carry her downstairs on a backboard, and then put her into the ambulance as my mom gets in her car to follow them.

The next morning my mom calls and says, “It was non-epileptic, so it didn’t hurt her brain.” I am relieved. Thinking that my sister was going to die was the worst feeling I have ever felt. That day I was driven to the hospital to see her. She was in a lot of pain, but she was better than she was last night.

It took my sister, and my family, three years, four diagnostic pediatric specialty hospitals, and five cities to find out what was wrong. That is the reality of being rare. My sister is rare.

Rare diseases are a significant problem today (more than 1,200 diseases have been identified and affect over 30 million people) and we can combat the silence by raising awareness and urging people to be compassionate towards each other’s suffering.

Gastroparesis is a disease that affects the normal movements of the muscles in your stomach. My sister has idiopathic gastroparesis. Diabetes did not cause it, and no one seems to know what did. We have been to four different pediatric hospitals that have all told us that her stomachache is in her head. Dr. Samuel Nurko at Boston Children’s Hospital diagnosed her with gastroparesis in February. Most of the time the cause of gastroparesis can be hidden, and the doctors can’t find a cause, so they have to go off of the symptoms the patient has.

The effects of gastroparesis are destroying people today. Additionally, according to IFFGD, “Most people with gastroparesis experience nausea and vomiting. Many have abdominal discomfort or pain, which can range from bothersome to debilitating. Other prominent symptoms include bloating, fullness after eating, or early fullness (satiety) – the inability to finish a meal. These symptoms may be mild or severe, depending on the person.” My sister lives with abdominal pain/discomfort most of the time. She cannot eat through her mouth, but almost every morning she wakes up with severe bloating. On some days she looks like she is seven months pregnant.

Chronic intestinal pseudo obstruction (CPO) is a rare disease that has symptoms that mimic those that are caused by a blockage, or obstruction, of the intestines (also called the bowel). CPO is caused mainly by nerve and muscle mis-movements that cause blockage symptoms in your bowel. This is also called dysmotility. Most of the time the doctor cannot find the cause. The doctors are uncertain as to what caused by sister to develop CPO, but its presence was verified by Dr. Nurko in February.

The effects of CPO are devastating people today because it limits their ability to live life to its fullest. Additionally, according to IFFGD, “Symptoms of bloating, pain, nausea and vomiting can result either from weak contractions or from disorganized (unsynchronized) contractions that result from intestinal muscle (visceral myopathy) or nerve (visceral neuropathy) problems.” Pain is a part of all of these people’s lives; they have to learn to live with it day in and day out. My sister is one of the many people who live in pain every day. She can be fine one moment and in severe pain the next. My sister suffers from constant nausea and both types of miscontractions. Like many rare diseases that affect the intestinal tract, CPO has a wide range of symptoms. Some are lucky to live with mild symptoms and infrequent attacks, while others experience the worst symptoms more often.

Short bowel syndrome (SBS) is a significant problem today because it has multiple causes. Some people lose part of their intestines due to accidents, others are born with strictures that need to be removed, others lose portions of their bowel for other medical reasons. The effects of SBS are crippling to people today because the main side effect is dehydration. Dehydration is taxing on the body and the mind. It makes it hard to take blood for tests, it causes headaches and loss of appetite. It makes the body work harder than it should. My friend has SBS. She tries to drink as much as she can, but only consumes 16 oz a day. Even 16 oz of water is not enough for her, but it makes her feel full. Even though the doctor is recommending 64 oz a day, she is working hard to consume just 16 oz.

Like both gastroparesis and CPO, SBS is a rare disease that affects its sufferers in a variety of ways. While dehydration is the main effect, SBS by definition means that you have less bowel with which to absorb vitamins and nutrients provided by the food you eat. This loss of absorption area brings a host of malnutrition issues.

While there are many solutions to the issue, one solution we must pay attention to is social awareness. IFFGD President Ceciel Rooker states, “…so that when people see those backpacks, they might think: ‘Wow, that must be someone show is requiring feeding and I wonder what it is that’s causing them to have to wear backpacks.'” The more everyone becomes aware of the needs and equipment utilized by those with rare diseases, the more accepting and inclusive and improved lives of those affected will be. Social awareness is the strongest solution because: 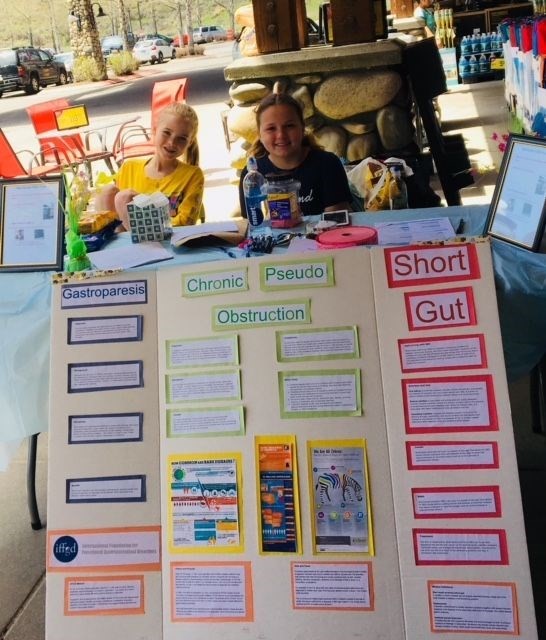 If we practice these issues then maybe my sister will not have to suffer from both intolerable pain in her body and pain from people misunderstanding.

Rare diseases are an important and overlooked plight. They affect millions of people and it is time for a call to action. We need to make the need for a better quality of life, treatment, and care a reality for the millions of people who suffer from rare diseases. Don’t wait, your sibling could be next.

How does one raise awareness for rare diseases? Well for my GUTS Factor, I chose to do a raffle. It took about a week to get all the prizes together. I went around to my parents’ group of friends asking for donations for the raffle. I ended up receiving some AMAZING donations in the name of both my sister and rare diseases. My uncle donated one of his most recent oil paintings. Our family friend Crystal donated a membership for an entire month at her gym! I was shocked and humbled to see this small group in the community rally behind my cause. I made a poster to demonstrate to others by GUTS Factor. The poster was divided into three sections, each section showcased one of the three diseases mentioned above, and gave some general information about each one. I was astonished as to how many of my close family friends wanted to donate prizes.

Why was I scared? Well, I was afraid no one would want to support me and my cause. Turns out a lot of people did, and a few of the people had relatives with a few of the same problems. A man walked up to my stand and said, “My wife is battling one of the same rare diseases as your sister. She has gastroparesis.” We exchanged a look of understanding and compassion that reminded me why I was out here. One outstanding charity that helps raise awareness for rare diseases is IFFGD, otherwise known as the International Foundation for Functional Gastrointestinal Disorders. They invited me to be a junior advocate as one of the first siblings to be on the Patient Advisory Committee. I have since then reached out to all of our health Representatives in the House and Senate as an advocate.

While the raffle prizes intrigued people, it was the poster that facilitated a conversation. In my small way I was able to start the conversation to raise awareness that these rare diseases exist in our community. The six hours I spent standing outside of the grocery store sparked the local call to action. We need to continue learning about and teaching others about these rare diseases and how it affects people that look like you and me.