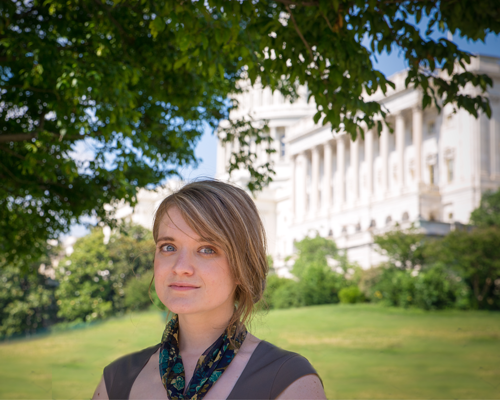 As the most recent addition to the IFFGD staff I had not before experienced a IFFGD Advocacy Day, nor, for that matter, had I even previously been to Washington, D.C. So, I was in for quite the couple of days.

The city itself looks the part of the head of the nation. Commemorative statues and plaques at every turn, majestic white marble monuments and stately buildings looming over the everyday processes of governance. To an outsider, this looks a lot like chaos, but in reality this is the place where decisions are made that affect our way of life. And, I was excited to be a part of it.

Before I was able to meet with members of the legislative body of the United States, I met the other digestive health advocates. These men and women had gathered together from across the country, some were already close friends introduced at previous Advocacy Days while others were strangers, to make their voices heard. They represented diverse backgrounds, lifestyles, and FGIMD profiles, but were united in their commitment to achieving greater recognition of these prevalent and debilitating, but so often overlooked diseases. The camaraderie we felt in the moment of coming together, knowing that so many others were sending their support even though they could not be there in person, was invigorating. We each recognized this as an opportunity few were afforded – an opportunity to speak to the offices of elected representatives of the people of the United States about a matter that meant a great deal to us.

At our introductory dinner we were briefed on the items on the IFFGD legislative agenda and leaders from the National Institutes of Health (NIH) and the Eunice Kennedy Shriver National Institute of Child Health and Human Development (NICHD) discussed topics related to federal funding and research. Next was an impassioned speech by a past advocate. Kat has been living with idiopathic gastroparesis, a condition characterized by certain long-term symptoms along with slow emptying of the stomach, for over six years. There is no known cause of this disorder and no cure. During that time she has had her stomach and large bowel removed. But, through it all she has remained upbeat and cheery, passionate about life and ever hopeful that a cure will be found.

While Kat’s retelling of her experiences with gastroparesis was sobering, I was encouraged by the optimism exuded by everyone in the room. Each person had their own story – their own account of how FGIMDs had forever changed their lives. Some had happy endings, like that of Malinda, a gastroparesis-sufferer who was successfully outfitted with a special pacemaker that regulates the contractions of her stomach, and some ended in tragedy, like that of Lonnie, whose wife passed away in 2012 as a result of her gastroparesis. But, each carried with it hope for the future.

The next morning dawned sunny and clear as we made our way to Capitol Hill and split off into groups arranged by state. I accompanied the Pennsylvania group, which included Lonnie and Malinda and her daughter, Zoe, and Arthur, our lone IBS representative. As I walked into my first meeting with a legislative aide of a United States senator, I felt my nerves swell, but I was also charged with the purpose of our message. What’s more, I was surrounded by men and women who had faced the very worst and emerged ready to share their stories.

Each legislative aide we met with responded differently to our stories and requests – some listened with quiet politeness while others offered questions and advice. After our final meeting we made our way to our debriefing session to put up our sore feet and meet for the last time as a group. We each shared our impressions of our effectiveness at reaching our audience and applauded each other’s efforts. Slowly, the advocates left, giving their goodbyes and hopes for next Advocacy Day.

While I cannot expect that every office we spoke with will immediately take action on our behalf I feel optimistic about the long-range effects of our presence on Capitol Hill. Each person who attended the 2014 Advocacy Day and many more who could be there in spirit only contributed to the betterment of disease outcomes of FGIMDs not only for themselves but for the millions of people living every day with these disorders. To all of them, I say “Thank You.”