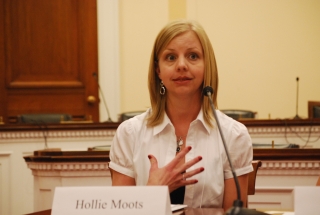 The last speaker at the June 20, 2012 congressional briefing on functional GI and motility disorders sponsored by IFFGD was Hollie. She shared her experience about life with gastroparesis.

An elementary school nurse, Hollie shared her “tummy story.” It began in 2009 with nausea that never seemed to go away, and grew to include indigestion, chest pain, heartburn, and significant weightloss. Then Hollie began to notice that she was feeling full quickly, and that everything centered around when she was eating. Her diet had dwindled to cereal and toast. Over a year and a half went by as Hollie visited many doctors, had several emergency room visits, tried numerous medications, paid high out-of-pocket costs for care, and spent hours on her computer researching. Finally, when a doctor asked, “What do you think is wrong with you,” a gastric emptying test was ordered. It came back and confirmed that Hollie was right, she had gastroparesis.

Hollie finally had a diagnosis, but she did not receive much guidance on how to proceed. She was told, “It won’t kill you, but some days you’ll wish you were dead.” At the time Hollie thought that it was the most insensitive thing that could come out of a doctor’s mouth, but it turns out he may have had more experience than originally given credit for. The first year of life with the diagnosis was hard both emotionally and physically, but Holly kept her chin up, went to work every day, and did her best to take care of her family.

Most importantly, Hollie says, she learned the importance of being her own advocate. Dr. Halpert’s presentation earlier in the briefing about the low quality of life for FGIMD patients hit home for Hollie. She says that, “even when you learn to live with physiological symptoms, the psychological and day-to-day impact of a condition like gastroparesis has, I don’t think anyone can understand.” A packet that says this is a functional gastrointestinal and motility disorder sounds very clinical, but they are real in the lives of Hollie and all who suffer. For her and the millions of people out there that have this very clinical diagnosis, not one aspect of their lives are the same as they were beforehand. Increases in the money for research and treatment would mean the world for Hollie and all whos lives are touch by FGIMDs.