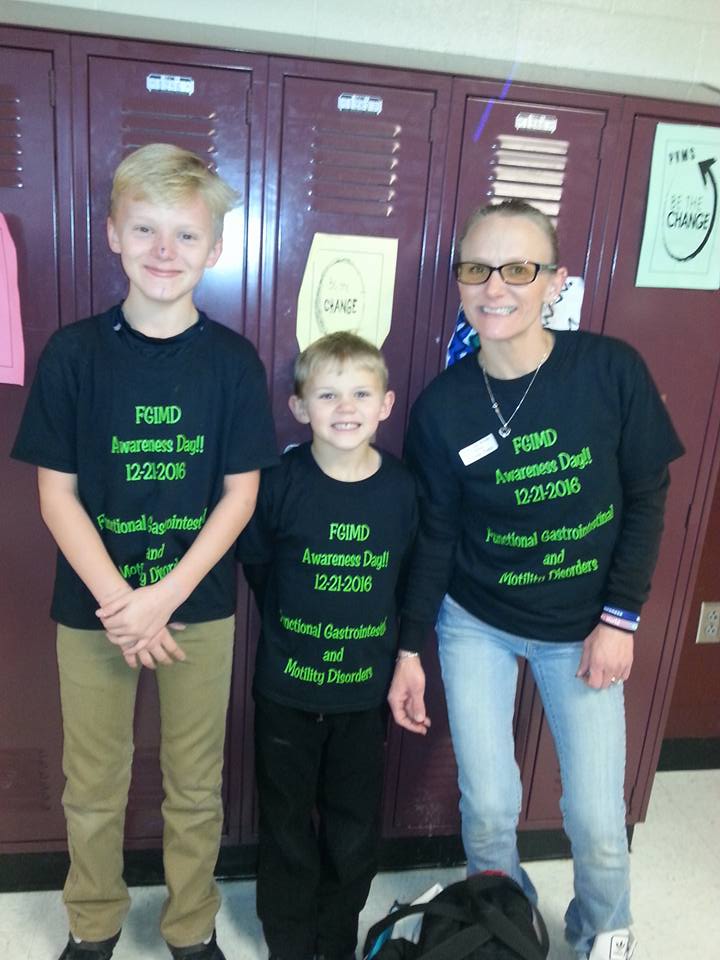 I am an advocate for Functional Gastrointestinal and Motility Disorders (FGIMDs). I started the group Weston’s World for FGIMDs on Facebook in March of 2016 to give updates on my youngest son, Weston, who has functional GI disorders and multiple motility disorders, to advocate and raise awareness for FGIMDs, and to find other families struggling with the same or similar FGIMDs.

Weston has had GI issues since he was born in December of 2010, such as vomiting, diarrhea, malabsorption, failure to thrive, acid reflux, gastroesophageal reflux disease (GERD), and chronic constipation. Weston has been to multiple gastrointestinal specialists and has had multiple formulas and diet changes. Finally, in September of 2014 we got his first of many tummy X-rays. Since then, he has had more diet adjustments and multiple tests done, for example: blood work, multple X-rays, a colonic transit study, anorectal manometry, colonic manometry, and multiple other types of diagnostic testing.

Weston has been hospitalized many times for nasogastric bowel cleanouts, bowel dis-impaction surgeries, and we have even tried an internal sacral nerve stimulator that was unsuccessful. He has had to be on multiple different medicines, oral and rectal, over the last six and a half years. We have tried and still do multiple natural and alternative treatment methods as well, such as probiotics, bowel management, behavioral therapy, relaxation therapy, aromatherapy, massage therapy, play therapy, tens unit electrical muscle stimulation, and more.

Weston is a patient at the the Colorectal Clinic at C.S. Mott Children’s Hospital at the University of Michigan (now known as Michigan Medicine). Weston has been diagnosed with a FGIMD referred to as chronic constipation due to slow colonic transit or colonic dysmotility. This means that his body cannot physically eliminate waste without assistance. His large intestine, even though everything is structurally and pathologically normal, does not function properly. He is currently on multiple medicines (oral and rectal, natural and pharmaceutical), physical therapy, biofeedback therapy, and electrical muscle stimulation along with counseling to help deal with and manage the emotional impact of the disorder.

Because there was not further testing that could be done at C.S. Mott Children’s Hospital, Weston was referred to Nationwide Children Hospital Motility Center in Columbus, Ohio for motility testing in December of 2016. Weston’s motility testing confirmed that he does have colonic dysmotility along with rectal dysmotility. We are currently trying itrasphincteric Botox injections and PT-biofeedback therapy to see if it gives our Mr. Weston Pants some symptom relief along with his already strict liquid intake, diet management, pharmacologic and therapeutic regimens. We basically just manage the motility disorders and use a regimen until it is no longer helpful and Drs adjust as necessary.

In 2016 we were able to get Governor Rick Snyder of Michigan to approve a proclamation for an FGIMD Awareness Day, which was December 21, 2016. This year (2017) we were able to get Governor Snyder to proclaim August as Functional Gastrointestinal and Motility Disorders Awareness Month in Michigan. In order to request the proclamation, it must be submitted with special language to the Governor’s office each year. I wrote up my request and submitted via email to Governor Snyder.

So many people struggle with FGIMDs and do not even realize that is what they are, and sadly, many doctors haven’t even heard of FGIMDs. We want everyone to know what they are so that the general public is aware of these disorders and the impact they can have on someone’s life! That is why our main goal is to spread awareness for FGIMDs so that more little ones can get the proper care, testing, and diagnosis in a timely manner!