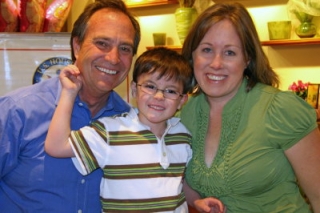 In November of 2011, after a “reality check” visit with Dr. Di Lorenzo, at Nationwide Children’s Hospital, I realized my best opportunity for Grant to live a long and happy future lies in our HOPE for advancement in research and available medications. It was at this visit that I became a true advocate for our five year old son, Grant, living with Chronic Intestinal Pseudo Obstruction. I have always fought for him to have the best care and doctors, but never thought I could make a difference on a greater level.

Grant & Rep. Perlmutter
With Christmas right around the corner, I chose to start my advocacy with a card campaign requesting support for The Functional Gastrointestinal and Motility Disorders Research Enhancement Act (H.R. 2239). I contacted IFFGD with my seemingly crazy idea. They were fully supportive (and excited) and gave me assistance in writing a letter to friends and family, sources of literature on H.R. 2239 & functional GI and motility disorders (FGIMD’s), and a good way for my friends and family to contact their Congressmen and women. I sent out over 150 Christmas cards to our friends, family and providers that included a letter asking for their support and a card for them to write a personal note to their Congressional Representative. More than 50 cards were returned to IFFGD, which in turn, were hand-delivered to the appropriate Representatives in Washington D.C.

A few months later, I decided it was time to get on a more personal level with our Congressman, Ed Perlmutter, and to ask for his support of H.R. 2239. IFFGD helped prepare me for a meeting with his Director of Constituent Services & Outreach, Jerry Pifer. Jerry and I had a short meeting where I was able to share our story, give her cards of support from Congressman Perlmutter’s constituents (I had more than 10 from my card campaign), and give her literature on H.R. 2239. A few weeks later, Grant and I had the opportunity to meet Congressman Ed Perlmutter at a Government in the Grocery even near our home. Thanks to Jerry, Congressman Perlmutter was already informed about H.R. 2239. He assured us he would co-sponsor H.R. 2239 and encouraged me to continue being a voice for Grant and the thousands of people living with FGIMD’s. I am proud to say, that as of April 18th, Representative Perlmutter is one of 10 co-sponsors of H.R. 2239.

I am also excited to say that IFFGD has asked me to speak at a congressional briefing at their advocacy day in June 2012. It is my hope that, by sharing our story, we will raise awareness and support for all people living with Functional GI and motility disorders.