Dyssynergic Defecation: About a Common Cause of Chronic Constipation

What is Dyssynergic Defecation? 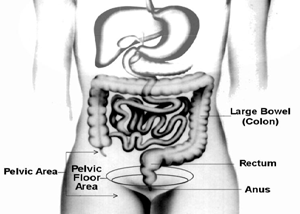 Dyssynergic defecation is a condition in which there is a problem with the way certain nerves and muscles function in the pelvic floor.

The pelvic floor is a group of muscles located at the lower part of the abdomen, between the hip bones, that supports pelvic organs such as the rectum, uterus, and urinary bladder. One of its most important functions is to help make possible our ability to have orderly bowel movements.

When do People Develop Dyssynergic Defecation?

A survey of 100 patients with the condition found that in nearly one-third (31%) the problem began in childhood. About an equal number (29%) appeared to have developed the problem after a particular event, such as pregnancy or an injury. In the remaining 4 out of 10 persons (40%), no cause was identified that may have brought on the condition.

Over half of the individuals that developed the condition in adulthood reported frequent or intermittent passage of hard stools. It may be that too much straining to expel hard stools over time is a factor that may lead to dyssynergic defecation.

Why do People Develop Dyssynergic Defecation?

It is not clear what causes dyssynergic defecation.

Muscles in the abdomen, rectum, anus, and pelvic floor must all work together in order to facilitate defecation. Most patients with dyssynergic defecation exhibit an inability to coordinate these muscles. Most often this problem of coordination consists either of:

This lack of coordination (dyssynergia) of the muscles that are involved in defecation is primarily responsible for this condition.

In addition, at least one-half (50–60%) of patients with dyssynergic defecation also show evidence of a decrease in sensation in the rectum. In other words, there is a problem with their ability to perceive the arrival of stool in the rectum.

What are the Symptoms of Dyssynergic Defecation?

People with dyssynergic defecation have a variety of bowel symptoms. As with many conditions involving the bowel, individuals may hesitate to speak plainly about these symptoms. Some may feel embarrassed to even mention bowel or stool-related matters. Others may simply not know how to describe their symptom experiences, or know what to discuss.

It is important for individuals to keep in mind that anything out of the ordinary, rather than being a source of embarrassment, is often the very reason for the visit to their doctor.

It is necessary to speak plainly to the doctor so he or she can most effectively diagnose and treat the problem. It is not unusual, for example, for a person with long-term constipation to find it necessary to use their finger to move stool out of the anus (doctors call this disimpacting stool with digital maneuvers).

Another common example is for women to use their fingers to press on their vagina to move stool (doctors call this vaginal splinting). In other words, these are medical signs that are meaningful to a physician.

Individuals need to feel at ease talking to their doctor.

Patients and doctors both benefit from establishing a relationship of comfort and trust. Open communication is essential. It may be easier to write down the troublesome signs and symptoms before the doctor visit. The use of a symptom questionnaire or stool diary is a helpful way to communicate and identify the exact nature of a bowel problem.

A number of studies have found that the following are common symptoms or signs associated with dyssynergic defecation, with 2 out of 3 or more of individuals reporting:

Backache, heartburn, and anorectal surgery have been noted as more likely in patients with pelvic floor dysfunction. However, symptoms alone are usually not enough to predict dyssynergic defecation.

Acute hepatic porphyria (AHP) is a rare condition with symptoms that are similar with other more common conditions (e.g., irritable bowel syndrome, fibromyalgia,endometriosis). This causes

What is Acute Hepatic Porphyria? Acute hepatic porphyria (AHP) is a group of rare genetic conditions that can cause severe, sudden (acute) symptoms. These symptoms

What are the symptoms of opioid-induced constipation (OIC)? The main symptom of OIC is a change in your usual bowel habits after you start taking

Acute hepatic porphyria (AHP) is a rare condition with symptoms that are similar with other more common conditions (e.g., irritable bowel syndrome, fibromyalgia,endometriosis). This causes

What is Acute Hepatic Porphyria? Acute hepatic porphyria (AHP) is a group of rare genetic conditions that can cause severe, sudden (acute) symptoms. These symptoms

What are the symptoms of opioid-induced constipation (OIC)? The main symptom of OIC is a change in your usual bowel habits after you start taking