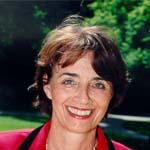 Dr. Taché was the 2005 recipient of the IFFGD Research Award to Senior Investigator, Basic Science.

Her early publications put the “brain-gut axis” on the map. Since then, she has been one of the pioneers in this field. In many ways, it has been her energy and enthusiasm that has ensured the continued vibrancy of the field.

Her identification of the role of corticotrophin-releasing factor (CRF) signaling pathways in stress-related alterations of gut motor function and visceral pain are of major and lasting importance.

“No one can live without experiencing some degree of stress all the time. You may think that only serious disease or intensive physical or mental injury can cause stress. This is false. Crossing a busy intersection, exposure to a draft, or even sheer joy are enough to activate the body’s stress mechanisms to some extent.

Hans Selye, M.D. (1907–1983) is credited to have introduced the term “stress” in the medical field. He defined it as the “stereotyped body response to any demand.” In his pioneer studies reported 70 years ago, he identified key targets altered by a variety of physical and chemical stressors.

These included the gut (intestines or bowel), endocrine (glands that control metabolism), and immune (protects the body against foreign substances) systems. His studies are important because some common medical conditions such as irritable bowel syndrome (IBS), inflammatory bowel disease (IBD), fibromyalgia, and migraine headaches may be stress-related.

IBS can affect 1 in 10 or more people in North America and has a significant worldwide prevalence. It is characterized by chronic or recurrent abdominal pain and/or discomfort associated with changes in bowel habits. These are the key symptoms in the absence of traditionally identifiable structural diseases(e.g., colon cancer, inflammatory bowel disease, etc). The expression of symptoms in IBS reflects a disorder where various factors interact.

Among them, psychosocial trauma and high rate of stressful life events (alone or combined with previous episodes of bowel infection/inflammation) have been identified as important risk factors in the onset, severity, and/or persistence of IBS symptoms.

The question is often asked, are psychological conditions a cause or effect of IBS? While not all persons with IBS exhibit psychological distress, it may be present in some patients with IBS, particularly in those with more severe symptoms and who seek health care in highly specialized (tertiary) referral centers.

On the other hand, the symptoms of IBS can sometimes be so bothersome and affect daily activities so much that the patient understandably develops emotional distress. Because various forms of emotional stress are important in the development and management of IBS, the understanding of the mind and body’s responses called upon during stress may provide insight on the underlying cause of IBS and open the door to new and more effective treatment.

A person’s stress response involves a network of brain regions that interact as they receive information from inside or outside the body. When stress actives this network, it triggers two main pathways. One is called the pituitary-adrenal axis, which acts to increase circulating hormones (glucocorticoids – particularly cortisol) involved with regulating the body’s response to stress. The other is the autonomic nervous system, which regulates involuntary bodily functions such as our blood pressure, heart rate, and bowel function.

Within the last decade, milestone progress has been achieved in identifying the substances that drive the stress response. One of the most important discoveries is a family of peptides (small proteins made of amino acids) named corticotropin-releasing factor (CRF), urocortin 1, urocortin 2, and urocortin 3. These peptides act as messengers and interact with CRF receptors named CRF1 and CRF2. The receptors are structures on cells that receive a stimulus or message. In turn, they induce a physiological response in the body.

These CRF peptides and receptors are located, among other sites, both in the brain and the gut. In the brain, they are located in regions linked with digestive function, emotional behavior, and autonomic nervous system activity. It is increasingly recognized that CRF1 receptors are activated during stress by CRF and urocortin 1. They play a key role in the endocrine, behavioral (mood), and gut responses to stress.

The Role of CRF1 Receptors in IBS Symptoms

These lead to the development of watery stool/diarrhea, and increased permeability within the lining of the bowel. (The more permeable the bowel lining, the easier it is for substances to pass through, which could allow the passage of bacteria within the intestine into the bowel wall.) The action of CRF in the brain-gut axis brings about changes that occur through the spinal cord and enteric nerve activity.

In addition, studies showed that CRF and urocortin 1 can act directly within the colon where they stimulate secretion and motor activity. In particular, CRF increases mucus and water secretion into the colon from cells lining the colon wall, and activates the enteric nervous system. These responses promote colonic motility, bowel movements, and diarrhea.

CRF also stimulates a type of immune cell, called mast cells, to release substances that play a role in increasing permeability, bacterial uptake from inside the colon to the colonic tissue, and pain response. Similarly, when given CRF, muscle contractions in the colon and pain reports increase in IBS patients compared to healthy individuals.

When examined under a microscope tissue specimens of the colon from patients with IBS support a possible role of mast cells in affecting abdominal pain. Administration of CRF or urocortin 1 results in many of the features already observed in the symptoms experienced by IBS patients.

Another aspect consistent with a role of CRF pathways in IBS symptoms are findings related to an amplification of information – like turning up the volume of signals – from the gut to the brain. They are increasingly perceived as bothersome gut sensations.

Animal studies have shown that painful stimulation of the colon activates brain nerve cells through CRF/CRF1 mechanisms associated with the development of increased vigilance and anxiousness. Therefore, it is conceivable that the increased sensitivity to abdominal pain in IBS patients may cause, in turn, a more pronounced, sustained, and/or frequent activation of CRF/CRF1 pathways. This may lead to increased vigilance, tension, and gut reactivity, which is then, associated with increased IBS symptoms.

In addition, a clinical trial of CRF1 antagonists in people already supports the improvement of mood without side effects. Tricyclic antidepressants (e.g., amitriptyline, desipramine) used in the treatment of IBS may alleviate abdominal pain and bowel symptoms. Interestingly, they also reduce CRF effects in brain regions involved in stimulating anxiety and colon function in animals.

In summary, these investigational studies reported to date indicate that the activation of CRF1 pathways may result in a combination of effects that are key features of symptoms in some IBS patients. These include stimulation of colonic motility, defecation/watery diarrhea, gut hypersensitivity that increases the perception of stimuli within the bowel (e.g., food, gas, motor contractions), focused attention (hypervigilance) toward gut sensations, and mast cell activation. Blocking the CRF1 receptors may alleviate all these effects.

Thus, the conceptual framework emerging supports that sustained activation of the CRF1 system at sites in the brain and/or in the gut may be one component underlying IBS symptoms. Targeting these mechanisms by drugs that block the action of CRF on selected CRF1 receptor sites may lead to treatment that is more effective to reduce IBS symptoms.

Where is Dr. Yvette Taché Now?

As a part of the 2021 anniversary events, IFFGD created the “Where Are They Now?” interview series designed to allow the gastrointestinal community to reconnect with past IFFGD Research Award winners. We conducted over 30 interviews virtually, to learn about the journey our research winners took and what current research topics they might be working on today. To find out where research award winner Yvette Taché is today watch their interview here.