His research covers different areas related to motility and functional GI disorders. These include better understanding of the complex gut-brain interactions and their role in generating symptoms.

Dr. Van Oudenhove’s research is helping to unravel the signals that process sensation and motility, and improve targeted treatments.

Clinical Science is the approach aimed at understanding the diagnosis and treatment of diseases and disorders through studies involving people, usually carried out in clinical settings.

Functional dyspepsia is the most prevalent functional gastrointestinal disorder (FGID) of the upper gastrointestinal (GI) tract. It affects 10–15% of the general population worldwide. Functional dyspepsia is associated with considerable healthcare costs to individuals, healthcare providers, and society. The disorder can significantly impact the quality of life of those affected.

A diagnosis of funcitonal dyspepsia is made on the basis of the presence of a group of symptoms that frequently occur together, in the absence of any structural or metabolic disease likely to explain the symptoms. The symptoms are thought to originate in the upper digestive tract (stomach and upper small intestine), and are felt in the middle upper part of the abdomen, below the breastbone and above the navel (epigastric region).

The symptoms most often include feelings of: 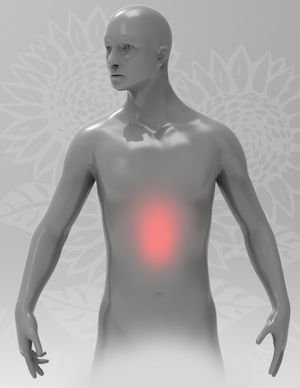 The exact causes of functional dyspepsia are not known and likely a variety of causes can lead to symptoms. The symptom patterns can vary among individuals and multiple factors may interact in each person to shape their symptom expression. These all make treating the disorder challenging.

The biopsychosocial model looks at functional dyspepsia, like other FGIDs, as the result of complex interactions between biological, psychological, and social factors. Our research group at the University of Leuven in Belgium has been trying to unravel the role of these different factors in functional dyspepsia. My particular interest lies in how the interaction between psychological factors (with their underlying biological mechanisms at the level of the brain), and sensitivity and motility of the GI tract (gastric sensorimotor function, regulated by the enteric and autonomic nervous systems) may play a key role in functional dyspepsia symptom expression.

Gastric sensitivity — About 4 in 10 people with functional dyspepsia experience epigastric pain or other symptoms at lower volumes of distension of the stomach than healthy people who do not have dyspepsia. They are said to be hypersensitive to gastric distension and this is associated with the symptom of epigastric pain.

The role of delayed gastric emptying in functional dyspepsia symptom expression is unclear. Moreover, increasing gastric emptying with the use of prokinetic/promotility drugs does not consistently improve dyspeptic symptoms.

Our research suggests that these different functions may not act independently. They may influence each other in a complex, and yet unknown, way.

A link between normal and abnormal psychological factors (for example, daily stress and anxiety or depression) and abdominal symptoms has long been recognized. Such a link is deeply ingrained in everyday language as a result of long-standing folk knowledge. Consider, for example, such commonplace phrases as “to not be able to stomach something or someone” and “to trust one’s gut reaction.” Modern research on the role of psychosocial factors in functional dyspepsia started with the adoption of generally accepted diagnostic criteria in the late 1980s to early 1990s.

“The interaction between psychological factors and sensitivity and motility of the GI tract may play a key role in functional dyspepsia.”

I strongly believe it is not productive to think about the relationship between psychological factors and functional dyspepsia symptoms in terms of simple cause and effect. Instead, interactions in both directions are likely to be at play. Where warranted, a multidisciplinary approach to the treatment of functional dyspepsia symptoms that targets psychological factors and GI function simultaneously is appropriate.

The question remains, what mechanisms underlie this reciprocal interaction between psychological and gastrointestinal functions, and symptoms of functional dyspepsia. Our research group at the University of Leuven has tried to answer this question.

We obtained data on biological (gastric sensorimotor function), psychological, and social factors, and functional dyspepsia symptom levels from a large group of individuals seen at our specialized (tertiary) medical referral center. These data allowed us to study the complex interactions between these different factors, which had mostly been studied separately before.

We found that both sensory and motor function in the stomach can be influenced by psychosocial factors or by psychological processes. We observed an association between anxiety levels with gastric hypersensitivity, and prior trauma associated with both gastric sensitivity and emptying.

I believe an important conclusion from this work is that psychological functioning and gastric sensorimotor function interact in a complex way. The presence of one does not exclude a role of the other.

We demonstrated that physical symptom reporting is the result of a complex interaction between several groups of psychosocial factors and gastric sensitivity.

Additionally, we studies how gastric sensation is processed in the brain in people with functional dyspepsia compared to healthy people without dyspepsia. We used an imaging technique (PET scan) to measure brain activity in response to stimulated gastric distension.

In order to understand the results of this study, it is important to distinguish between brain regions and network where bodily signals are processed and brain circuitry where activity in the processing regions is modulated (altered), including emotional and cognitive circuits. Perception of gastric signals is the result of the interaction between these two brain networks. Abnormalities in these mechanisms may underlie symptoms in functional dyspepsia in general, and the influence of psychosocial factors on symptoms in particular.

“Psychological functioning and gastric sensorimotor function interact in a complex way. The presence of one does not exclude a role of the other.”

In our study, hypersensitivity of gastric sensations in individuals with functional dyspepsia showed activity patterns in similar pain processing regions as healthy controls, but at far lower gastric pressure thresholds.

Furthermore, we found a lack of activation of an important pain modulatory region in the brain (anterior cingulate cortex) during gastric distension in individuals with functional dyspepsia. This may underlie the increased signaling in the pain processing regions. Anxiety was also found to interfere with the function of the pain modulatory region.

Finally, we demonstrated that a history of severe trauma (represented by physical or sexual abuse) in individuals with functional dyspepsia affects the function of a number of important pain processing and modulatory regions in the brain.

Functional dyspepsia describes a set of symptoms in the upper abdomen shaped by a complex interaction between biological, psychological, and social factors. We are gradually gaining insight into the nature of these interactions, as well as the neuro-biological mechanisms underlying them. This warrants a biopsychosocial approach to the definition, diagnosis, and treatment of functional dyspepsia.

As a part of the 2021 anniversary events, IFFGD created the “Where Are They Now?” interview series designed to allow the gastrointestinal community to reconnect with past IFFGD Research Award winners. We conducted over 30 interviews virtually, to learn about the journey our research winners took and what current research topics they might be working on today. To find out where research award winner Lukas Van Oudenhove is today watch their interview here.