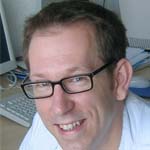 Dr. Storr is the recipient of the 2009 IFFGD Research Award for Junior Investigator, Basic Science. Through his research, Dr. Storr focuses on ways to characterize physiological pathways involved in the regulation of gastrointestinal function, to identify structures that may be targeted pharmacologically and to translate these concepts into the treatment of functional gastrointestinal disorders.

What are functional gastrointestinal diseases?

Functional gastrointestinal disorders (FGIDs) are a broad spectrum of different disorders that are grouped together. They are associated with numerous symptoms like nausea, vomiting, bloating, difficulties swallowing, abdominal discomfort and pain, as well as altered bowel habits, just to name some of the possible symptoms. The intensity of these can range from minor occasional symptoms to frequent

or daily debilitating symptoms that impair normal daytime activities and the ability to work. To date for most of the functional gastrointestinal disorders no cause is known and thus the ability to diagnose them correctly is sometimes challenging. Since the exact mechanisms underlying some of these disorders, such as functional dyspepsia or irritable bowel syndrome, are unknown many of these disorders are presently diagnosed by criteria that identify constellations of symptoms (the Rome III criteria). Prior to being diagnosed based on symptom criteria only, patients may have to undergo numerous tests and laboratory checks to identify possible functional gastrointestinal disorders or structural diseases where the cause or a functional alteration is already identified.

The abnormal function (pathophysiology) of the different functional gastrointestinal disorders is complex. Irritable bowel syndrome (IBS) is one of the most recognized out of this group. The current understanding of the pathophysiology of irritable bowel syndrome, as for many other functional gastrointestinal disorders, incorporates biological and psychosocial factors as playing a crucial role in the onset and propagation of symptoms, and this is known as the biopsychosocial model.

Various additional abnormalities have been reported in different groups of patients with functional gastrointestinal disorders and these include increased gut sensitivity (visceral hypersensitivity), altered gut motility, disturbances of central processing of visceral sensory information, and other disturbances of brain-gut interactions.

What is the endocannabinoid system?

Termination of the action of endocannabinoids occurs by specific cellular uptake from the space between cells followed by intracellular breakdown involving specific enzymes. Three of these have been clearly identified for the breakdown of the different endocannabinoids. Most of the presently known components of the endocannabinoid system, the receptors, and the degradation pathways are present in the gastrointestinal tract.

How can this endocannabinoid system be useful in functional gastrointestinal disorders?

When can these treatments be applied to patients?

There are still a number of limitations that need to be addressed. Presently the knowledge on the endocannabinoid system is limited to animals and needs to be fully translated into humans. This has to be performed step by step and when this is completed, the most promising patient population needs to be identified for first clinical trials.

In addition, drug treatments that were suggested from animal research are limited by side effects that would presently not allow human use. Thus, basic research has to provide mechanisms by which these side effects can be limited or avoided. We presently aim to identify cannabinoid-like drugs that specifically target the gastrointestinal tract and have reduced or no effects in other tissues.

Drugs which have only limited activities in the brain, the region where most of the side effects occur, are especially promising candidates for future human use. Another approach that we test is to more specifically target the cannabinoid-2 receptor, since activation of this receptor type is accompanied by fewer side effects compared to activation of the cannabinoid-1 receptor.

There is still more research needed until drugs targeting the endocannabinoid system may be available for the treatment of functional gastrointestinal disorders. The presently available information looks very promising and allows exciting insights in the understanding of gastrointestinal physiology and pathophysiology.

Where is Dr. Martin Storr Now?

As a part of the 2021 anniversary events, IFFGD created the “Where Are They Now?” interview series designed to allow the gastrointestinal community to reconnect with past IFFGD Research Award winners. We conducted over 30 interviews virtually, to learn about the journey our research winners took and what current research topics they might be working on today. To find out where research award winner Martin Storr is today watch their interview here.