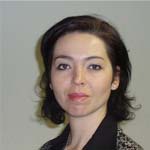 Dr. Bradesi is the recipient of the 2007 IFFGD Research Award for Junior Investigator – Basic Science.

Her current research interests focus on the topic of stress induced neuroimmune interactions in the spinal cord, identifying the underlying molecular mechanisms, and the role of this response in chronic visceral hyperalgesia.

Functional pain disorders are clinical syndromes – groups of signs or symptoms – in which patients experience persistent or recurrent bodily pain or discomfort that cannot be explained by current injury or visible abnormalities.

Health professionals in clinical practice frequently observe that patients diagnosed for one specific functional syndrome often report symptoms of other syndromes and are much more likely to have or develop another functional syndrome during their lifetime. For example, bloating, feeling of abdominal distension, abdominal pain, headache, and fatigue are reported in most of the different functional pain syndromes; patients suffering from IBS are more likely to suffer from fibromyalgia, chronic fatigue syndrome, or chronic pain.

To date, the management of functional pain syndromes has failed to provide adequate relief to many patients. The lack of effective therapeutics available illustrates the limited understanding of the biological mechanisms underlying the expressions of symptoms in these conditions.

Recently, a new concept of activation of immune cells within the central nervous system (CNS), including the brain and the spinal cord, has been proposed as a major factor contributing to the generation and maintenance of chronic pain. Immune cells in the CNS are part of a group of cells called glia. Glial cells are not nerve cells. They include several types of cells, each with different functions. Glia were initially considered as a silent support (also called “glue”) for neurons (nerve cells).

Recent evidence indicates that glia plays an important active role in the proper functioning of neurons and in many chronic disease states, including Alzheimer’s disease, spinal cord injury, and chronic pain.

In general, the function of glia is to provide a stable internal environment around neurons and to take part in the communication between neurons. Recently, it has been discovered that glia in the spinal cord play a major role in the transmission of pain signals in conditions of chronic pain associated with inflammation or injury.

In these conditions, glia was found to be activated and to communicate with neurons via the releases of several chemical substances, triggering a chain of reaction leading to increased pain perception. Experimental studies have demonstrated that if glia activation is chemically blocked, then, the pain associated with inflammation or injury is decreased.

We propose that immune activation in the CNS may be considered as a possible physiological basis for the overlap of the different symptoms in functional disorders, including functional bowel disorders. To date, the role of glia in experiments of functional chronic pain has not been investigated.

Observations of patients have demonstrated that chronic life stress can play a major role in the onset or worsening of symptoms in individuals suffering from functional disorders, and in particular IBS. In our laboratory, we study the mechanisms of the influence of stress on visceral pain in the colon, and we have developed an experimental model to represent repeated psychological stress. We have demonstrated, in an animal model, that exposure to stress daily for 10 consecutive days results in increased pain response to stimulation of the colon (visceral hyperalgesia), which lasts for about a month.

In view of the observations reported above, we have recently focused our research efforts to study whether or not chronic pain sensitivity in the colon in response to stress may be linked to activation of the immune system (glia) in the CNS. Our interest in the effect of stress on glia activation was supported by other recent published work showing experimental glia activation in the brain. However, there is no data available on the effect of stress on glia in the spinal cord.

We were able to demonstrate that chronic stress leads to activation of spinal glia and that blocking glia activation during stress can prevent the development of colonic pain sensitivity. This is the first demonstration that chronic visceral pain may be related to immune changes occurring at the spinal cord level and that these changes can happen in response to chronic stress, without exposure to any inflammatory stimuli or tissue insult.

In summary, accumulating evidence indicates that immune activation within the CNS plays a crucial role in the increased pain perception observed in conditions of inflammation or injury in the body (peripheral). In addition, an increasing number of reports from experimental animal studies show that glia activation in the brain and spinal cord (the central nervous system) can occur in response to stress.

Combined with increasing reports that chronic stress plays a key role in the worsening or intensity of symptoms in functional gastrointestinal disorders or functional pain disorders, these data provide a conceptual framework supporting a possible role of CNS glia activation in the development of multiple symptoms in syndromes of functional pain.

To date, the management of functional pain syndromes, in particular the pain component of these syndromes, relies on drugs primarily targeting neurons, which has failed to provide adequate relief to many patients. The current state of evidence illustrates the need for innovative research challenging this current drug development strategy.

We propose a new conceptual model in which modification of the interaction between neurons and immune cells in the central nervous system, responding to chronic stress, plays a predominant role in the pain sensitivity of pain signaling pathways. This provides a new basis for drug development for the treatment of chronic functional pain.