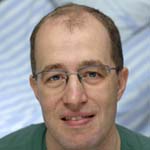 Dr. Simrén is the recipient of the 2007 IFFGD Research Award for Junior Investigator – Clinical Science. . His main research areas are the pathogenesis and pathophysiology of functional gastrointestinal (GI) disorders, as well as the treatment of these disorders and the importance of psychological factors.

The changes in normal function that we see in irritable bowel syndrome (IBS) are not completely understood. A number of factors are considered to be of importance for the symptom generation in patients with IBS. In our research during the last couple of years we have tried to further evaluate why IBS develops. We specifically have focused on the role of food and nutrients for gut function in IBS, and the link between different alterations of function and the symptom pattern of the patient.

The majority of patients with IBS describe a link between what they eat and their symptom severity. In a survey of IBS patients a couple of years ago we found that especially fatty foods and food items rich in carbohydrates were considered by IBS patients to cause symptoms. In this study we also found that females and anxious patients had more severe food related symptoms. In follow-up studies we have looked at potential mechanisms behind this food sensitivity in IBS.

We also compared the effect of two different kinds of meals – one rich in carbohydrates, the other one rich in fat – on the sensitivity of the rectum in IBS patients. Here we found that especially the fatty meal made the rectum of IBS patients more sensitive to balloon distensions. Taken together these studies provide a plausible explanation of the symptoms following a meal so commonly reported by IBS patients, especially after fatty foods.

The logical consequence of our findings is to advise individuals with IBS to eat less fat. In other investigations we have also found that food exaggerates alterations found in the fasting state (periods between meals) of IBS patients. For instance, we found altered motility in the small intestine, which also can be involved in the generation of postprandial symptoms in IBS. To conclude, worsening of symptoms following meals in IBS patients is probably due to several factors. Enhancement of sensitivity in the gut, as well as alterations in gastrointestinal motility, are important factors.

Link Between Symptoms and Contributing Factors in IBS

As stated above, many factors probably contribute to IBS, and not all of the factors described are present in all persons with IBS. Moreover, the symptom pattern in individuals with IBS differs from person to person. Altered bowel habits is one of the hallmark symptoms of IBS; but some persons predominantly experience diarrhea while others have hard and infrequent stools, whereas a large proportion of the IBS patients have alternating diarrhea and constipation. Furthermore, even though pain, discomfort, and bloating are common in IBS, the severity of these symptoms differs among individuals. In some persons they are the dominant symptoms, whereas the altered bowel habit is the dominant symptom in others.

One explanation behind the lack of really effective treatment options in IBS is that we do not understand the link between the presence or absence of different contributing factors and the symptom pattern of the patient. We have ongoing projects where we try to understand this link better, and recently we have demonstrated that patients with IBS who have increased sensitivity in the lower part of the gastrointestinal tract are more likely to have more severe symptoms of pain and bloating as compared with those with normal sensitivity. In that study we also demonstrated that the total gastrointestinal symptom severity was influenced by the severity of anxiety; the sex of the patient, with females having more severe symptoms than males; and also by the sensitivity in the lower gut. However, of great importance, these factors were not the only relevant factors for the symptom severity – other factors not evaluated in this study are probably also of great importance for the symptom severity of IBS.

In ongoing studies we now try to link other causative factors with the symptom pattern. Preliminary results from these studies, so far only published as meeting abstracts, underscore the importance of psychological well-being for the gastrointestinal symptoms, and demonstrate that multiple factors seem to interact. In other words, having alterations in several interacting systems increases the risk of having more severe symptoms. This further strengthens the idea of IBS being a disorder with multiple contributing factors. In the future increased knowledge about the relevance of the different alterations in symptom patterns among IBS patients will likely increase the chances of finding effective treatment alternatives for these patients.

Inflammation and bacteria in IBS

Like several other groups, our group has also looked at the importance of mild inflammation in the gastrointestinal tract in IBS patients. We have found alterations in the activity and response pattern of a specific type of white blood cells (T lymphocytes) in the colon of IBS patients, further strengthening the concept of mild inflammation being of relevance in IBS. However, it also seems to be possible to detect alterations in the response pattern and activity of different kind of white blood cells not only in the gut, but also in the blood.

We do not believe that we, at this stage, can justify widespread use of antibiotics for IBS patients based on our and other groups’ findings. A too liberal use of antibiotics might turn out to worsen symptoms in some patients and lead to the development of problems with bacteria being resistant to commonly used antibiotics. Therefore, we need to learn more about the relevance of bacteria in the gut for gastrointestinal symptoms.

This is a short summary of some of the investigations we have performed during the last several years in order to explore the underlying causes of IBS. We will continue doing research within this area, and this is made possible for instance thanks to generous support from the International Foundation for Functional Gastrointestinal Disorders.

Where is Dr. Mangus Simrén Now?

As a part of the 2021 anniversary events, IFFGD created the “Where Are They Now?” interview series designed to allow the gastrointestinal community to reconnect with past IFFGD Research Award winners. We conducted over 30 interviews virtually, to learn about the journey our research winners took and what current research topics they might be working on today. To find out where research award winner Mangus Simrén  is today watch their interview here.