Diverticula occur throughout the gut, but by far the most common and most important are those that occur in the colon. The diverticula discussed herein are colonic diverticula. Their importance is frequently misunderstood. 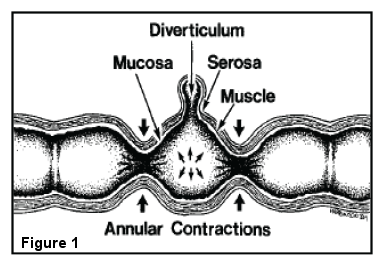 How common are colonic diverticula?

We are all born without colonic diverticula, but many of us acquire them over a lifetime. In Western societies, half the population will have at least one, and usually a few dozen, by age 60.

These small outpouchings are much less common in lifelong vegetarians, and it is commonly thought (but unproven) that a high fiber diet helps prevent diverticula.

Most diverticula occur in the left colon; they also occur elsewhere, but not in the rectum. The common hypothesis is that relatively high pressures generated within the colon by muscular contractions force the inner mucosa to penetrate through the path of small blood vessels within the colon wall and to bulge beyond the serosa (Figure 1). The muscle layer along the site of left colon diverticula is commonly thickened, lending credibility to the notion of high intracolonic pressure. The result may be rows of bulges along the colon at the sites of the penetrating arteries.

Why such this may occur in one-half the North American and European populations and not the other half is a mystery. Perhaps the great prevalence in Western populations is related to the relative lack of dietary fiber consumed by these populations. Low dietary fiber results in small stools, and an undistended colon may generate more pressure within the colon. Whatever the cause, the presence of colonic diverticula – often discovered during the course of a barium enema x-ray, colonoscopy, or surgery – is almost always of no significance.

Do diverticula cause symptoms?

There is no evidence that the diverticula themselves cause any symptoms. It is hard to imagine how one could be aware of a few outpouchings in the large intestine. The myth that abdominal pain may be caused by diverticular disease is explained by coexisting painful conditions such as irritable bowel syndrome (IBS). If diverticula occur in about one-half of the population over age 60 and IBS occurs in 15% of adults, it is not surprising that sometimes they may coexist. One does not lead to the other.

What can go wrong?

Diverticulitis – For unknown reasons, a diverticulum, usually in the left colon, can become inflamed (diverticulitis) and sometimes burst leaking bacteria-rich feces into the abdominal cavity (peritoneum). The result is usually confined to the surface of the adjacent colon producing an acute, sometimes devastating illness characterized by severe abdominal pain in the left lower part of the abdomen, fever and prostration. The treatment usually consists of fluids, bed rest, and antibiotics. Some cases require hospital admission.

Sometimes the infection fails to be localized along the colon wall and an abscess occurs. Patients with a pelvic or abdominal abscess are very ill, and the abscess fluid (pus) must be drained through a large needle directed by a radiologist, or sometimes by a surgeon. In very severe cases, the colon above the abscess is brought out to the skin by a surgeon and the intestinal contents are temporarily collected in a bag. This is called a colostomy. Later, when the infection has settled down, the affected colon is removed and the colon rejoined.

Rarely, there may be free perforation of intestinal contents into the peritoneum. Peritonitis is life threatening and requires emergency surgery. Also rarely, a severe attack of diverticulitis may cause a narrowing of the colon that causes an obstruction. It also rarely may cause a passage from one segment of the colon to the small bowel, bladder, vagina, or skin. The latter phenomenon is called a fistula. These complications are rare and should not concern those who have uncomplicated diverticula.

Diverticular hemorrhage – As described above, diverticula follow the paths of the arteries as they penetrate the muscle layer of the colon wall. Uncommonly, these same arteries can erode through the thin wall of the diverticulum and cause a major hemorrhage. This usually occurs when a person is elderly. The earliest symptoms are faintness and the appearance of much bright red blood by rectum.

Such a complication requires hospitalization and blood transfusion. Colonoscopy is sometimes attempted to localize the site of the bleeding, but is technically difficult. Angiography may also be done. In this procedure dye that can be detected by x-ray is injected into the arteries of the intestines. If the bleeding is active, some dye may be seen leaking into the colon. While diverticulitis almost always involves the left or sigmoid colon, most diverticular bleeding occurs in the right side of the colon.

Fortunately, the bleeding usually stops spontaneously, but recurs in about one-quarter of cases. Infrequently, a surgeon must operate to remove the segment of the colon containing the bleeding diverticulum.

What should you do about your colon diverticula?

Those who have colonic diverticula and no symptoms can relax. Nothing is likely to happen because of them.

Some physicians recommend a high fiber diet, or bran or psyllium supplements, in the belief that lack of fiber causes the diverticula and that such treatment may prevent complications. The notion that nuts or seeds may lodge in the diverticula and provoke diverticulitis is probably untrue.

If there are coexisting chronic abdominal pains, it is likely to be associated with IBS or a similar disorder. This should be discussed with a physician. It is useful to know if diverticula are present. The information may help a doctor in the event of an attack of pain or bleeding that could result from these otherwise innocent little colonic outpouchings.