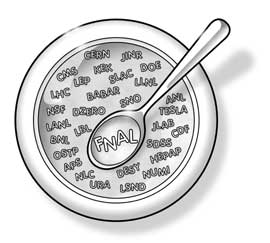 We do our best to spell out the agencies, acts, and offices that are often reduced to a string of letters that look like someone made up their names by taking a spoon into a bowl of alphabet soup.  Some common acronyms are:

ARRA – the American Recovery and Reinvestment Act, also known as the Stimulus or the Recovery Act, it is an economic stimulus package passed into law in 2009 that supplements the annual federal budget.

CDMRP – the Congressionally Directed Medical Research Program.  It is a medical research program funded every year by Congress as part of the Defense Appropriations Act, with disease-specific focus.  Applications and programs are reviewed by scientists, clinicians, and consumers.  Learn more at http://cdmrp.army.mil/.

CR – A type of budget related legislation passed by Congress near the end of the federal fiscal year to temporarily fund government agencies and programs until the regular appropriations bills have been agreed upon and signed into law.

DOD – the Department of Defense.  It is America’s oldest and largest government agency, in charge of providing the military forces needed to deter war and to protect the security of our country.  Employees include both military and non-military members.  Learn more at http://www.defense.gov/.

FDA – the Food and Drug Administration.  It is part of the U.S. Department of Health and Human Services, and is responsible for regulating the safety of food, drugs, biological products, medical devices, cosmetics, and products that emit radiation.  Learn more at http://www.fda.gov.

FY – Fiscal Year, a period of calculating annual financial statements.  This is not always the same as a calendar year; while businesses can set their own fiscal year, the federal government’s fiscal year runs from October 1st – September 30th.  We are currently in FY2013; FY2014 will start October 1, 2013.

GWIRP – Gulf War Illness Research Program. It is a medical research program funded every year by Congress through the Department of Defense (DOD) as part of the Defense Appropriations Act. Projects focus on studying the health effects of service members deployed to the Gulf War region, including functional GI disorders. Learn more at http://cdmrp.army.mil/gwirp/.

HHS – the U.S. Department of Health and Human Services. It is a government agency responsible for protecting the health of all Americans and providing essential human services.  It includes the Office of the Secretary and 11 operating divisions, such as the Centers for Disease Control and Prevention (CDC), the Food and Drug Administration (FDA), and the National Institutes of Health (NIH).  Learn more at http://www.hhs.gov.

NCATS – the National Center for Advancing Translational Sciences.  It is a branch of the National Institutes of Health (NIH) responsible for connecting and enhancing the development, testing, and implementation of diagnostics and treatment options across a wide range of diseases and conditions.  Learn more at http://www.ncats.nih.gov/.

NIDDK – the National Institute of Diabetes and Digestive Kidney Diseases.  It is a branch of the National Institutes of Health (NIH) responsible for conducting and supporting medical and scientific research focused on diabetes and other endocrine and metabolic diseases; digestive diseases, nutritional disorders, and obesity; and kidney, urologic, and hematologic diseases.  Learn more at http://www2.niddk.nih.gov/.

PPACA – the Patient Protection and Affordable Care Act, passed into law in 2013 as the principal health care reform legislation of the 111th Congress.  Learn more, including full text and a timeline of what’s changing and when, at http://www.healthcare.gov/law/index.html.

PRMRP – the Peer Reviewed Medical Research Program.  Established in FY1999 as part of the Department of Defense (DOD) to support research in science and medicine to enhance the health and well-being of military personnel, their families, and veterans.  The program is funded through Congressional appropriations.  Learn more at http://cdmrp.army.mil/prmrp/default.shtml.

VA – the Department of Veterans’ Affairs.  It is the government agency in charge of providing benefits and opportunities to military veterans, including health care and medical benefits, pension benefits, disability compensation, and education benefits.  Learn more at http://www.va.gov/.