Question
I am 43 year-old woman and have been increasing my exercise workout intensity greatly over the past year. At the same time, I started to experience diarrhea and heartburn, and I often have to find a bathroom fast. Could my exercise routine be causing this?

Answer
The benefits of keeping up a regular exercise program are well-documented and include better sleep habits, stronger bones, weight loss with maintenance and/or gain of lean muscle mass, fewer heart problems, and tighter glucose control in diabetes.

However, in addition to these benefits, there is evidence that exercise can contribute to gastrointestinal (GI) disorders which can cause unpleasant upper or lower abdominal symptoms. These symptoms include reflux/heartburn, belching, bloating, stomach pain/cramps, vomiting, nausea, side ache, flatulence, urgency, diarrhea, and intestinal bleeding. While the types of GI symptoms vary from person to person, some symptoms, such as diarrhea, can be severe enough to impact exercise performance. 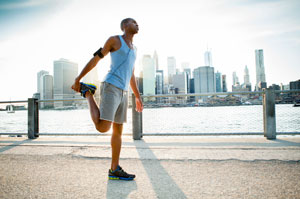 To begin with, untreated reflux, which causes heartburn, is common. It can lead to needless suffering. Most often reflux happens when the muscle between the esophagus and the stomach (lower esophageal sphincter, or LES) relaxes at the wrong time. There is evidence that exercise can lead to a decrease in the LES pressure resulting in more reflux episodes.

Eating too soon prior to exercise can also lead to LES relaxations. Plus, the type of exercise one is involved with can affect reflux episodes. The jarring effects of running appear to cause more reflux episodes than a similar workload involving a low-impact exercise like cycling.

Therapy can include medicines and changing one’s exercise plan. Ask your doctor what medication is best for you. Drugs like H2 blockers and proton pump inhibitors can reduce both acid exposure and symptoms. In addition, choosing an exercise like cycling or swimming, instead of running, may help those athletes who have persistent reflux.

Diarrhea and urgency (needing a bathroom within minutes after feeling the urge to have a bowel movement) are common symptoms in endurance athletes, especially long-distance runners.

According to research, about 90% of long-distance runners experience some form of GI symptoms (including diarrhea) during exercise and accept their symptoms as a normal consequence of running and therefore do not consult a physician. Understanding why certain GI symptoms, such as diarrhea, occur during exercise can help to coordinate a healthcare plan that improves exercise performance.

What causes unpleasant GI symptoms such as diarrhea during intense exercise?

According to research, athletes experience GI symptoms for a variety of reasons, but there are generally three main triggers or causes:

In order to prevent GI symptoms such as diarrhea during exercise, some guidance can be provided.

If you are experiencing diarrhea as an athlete, you should talk with your healthcare provider about your symptoms.  They will discuss with you if further medical treatment should be taken.  This will depend on several factors including age and severity of symptoms. Bleeding and persistent diarrhea may signal a severe condition and should always be brought to the attention of a doctor. Mild occasional symptoms should respond to altering the exercise routine, reducing the level of exertion, nutritionally training the gut for competition, or use of medication to decrease diarrhea. Loperamide, which is available over-the-counter to control diarrhea, has been shown to decrease stool frequency when taken prior to an intense exercise such as running in a race.

Note: As exercise levels become more rigorous, caution is advised for those who take, or are considering using either antispasmodic or antimotility drugs. Antispasmodic drugs (such as atropine, hyoscyamine or dicyclomine) relieve, prevent, or lower the intensity of spasms in the smooth muscles of the body, such as those found in the bowel. They are often used to help control cramping in the abdominal area, urgency to have a bowel movement, and discomfort or pain that is often associated with diarrhea and are common symptoms in patients with IBS. Antimotility drugs (such as loperamide) slow down the movement of your gut by reducing the number of contractions. This will allow the fluid contents passing through the intestine more time to be absorbed, thus allowing less watery bowel movements. Talk to your doctor before taking with of these types of medication as they can lead to an inability to control core body temperature by inhibiting perspiration.