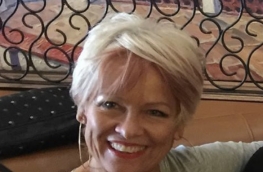 I remember it like it was yesterday. It was June 25, the day that Michael Jackson died. I was watching it from the family flooring store I was working out on my laptop, and I had been drinking V-8 juice and the V-8 fruit juice when it hit me. I thought I was having a heart attack, the pain behind my breast bone was so bad it felt like I had been shot.

I got up from my office chair and started walking around our show room, then I was sure I was having a heart attack, I had to close up the store early and I went right to urgent care where they gave me an EKG which was OK. I was then referred for an atomic heart test, which was extremely strange, but my heart was great, they told me I needed to get scoped immediately. Well, My insurance would not cover it at the time so I never got one that was about seven years ago?

All I know is I had never experienced a pain like that other than childbirth. The doctor put me on omeprazole, and told me that I had to lose weight, which I already knew so I quit my evening cocktails and I went on at the Gerd diet and in five months I lost 50 pounds. I am only 5 foot three, and I was tipping the scales at that time at 180 which is definitely not acceptable. My Gerd went away and I made sure that all of my meals were clean, and very small the size of the palm of my hand, which really bummed me out because I could eat a whole plate bigger than my husband and he is 6 foot four.

I have had panic disorder, anxiety and depression since my early teens, and I was put on Paxil for my panic attacks which worked wonderfully, and Xanax, which really helped me for years, in fact I’ve been on them for over 25 years now, however now I am on Clonopin instead of Xanax because I have chronic insomnia too.

My psychiatrist has backed me off of my Clonopin which used to really help me relax, are used to be a very active person doing every activity you could think of from rollerblading to swimming to bicycling to fitness walking to weight training, you name it I did it. But when Gerd hits, as you all know on these boards, you get very angry when people say “oh yes I have heartburn too!” ITS 100 times worse than heartburn – It’s a colic that goes so deep, you cannot think straight.

today is Sunday, August 9 and tomorrow I’m going to call my doctor and hopefully I can get an appointment for an endoscopy. I really need to find out how bad the damages, my other sister was diagnosed years ago with Barrett’s esophagus but she was a heavy smoker and drinker.

I sympathize with all of your stories, and it seems like I can relate to almost everyone of them, all I know is that this sucks! I’m 63, and where I live it’s way too hot to go for a walk’s now plus the Covid, I think we’re all stressed out because of everything that’s happening and that doesn’t help us either.

Share your experience of living with a digestive disorder – it can be therapeutic for you as well as others who suffer.