IFFGD PRESENTS SENATOR BALDWIN WITH 2019 DDNC DISTINGUISHED PUBLIC SERVICE AWARD
From introducing multiple statements in the Senate recognizing Gastroparesis Awareness Month to leading a resolution in the House to raise awareness of functional gastrointestinal (GI) and motility disorders, Senator Tammy Baldwin (WI) has been a constant champion for the digestive health community during her time in Congress.

In recognition of her efforts, IFFGD was honored to present her with the 2019 Distinguished Public Service Award on behalf of the Digestive Disease National Coalition (DDNC). This award is presented annually to Members of Congress who have demonstrated a commitment to advancing legislation supporting digestive diseases research and improving national awareness and education on behalf of the millions of Americans living with a digestive disorder. We are grateful to Senator Baldwin for her long-time support of her constituents with GI illnesses and look forward to continuing to work with her office on issues important to the digestive health community.

2017: HOUSE OF REPRESENTATIVES BILL 1187
The Functional Gastrointestinal and Motility Disorders Research Enhancement Act was reintroduced in the U.S. House of Representatives in 2017 as H.R. 1187 by Congressman F. James Sensenbrenner, Jr. (WI). This budget-neutral legislation seeks to expand basic and clinical research into functional gastrointestinal and motility disorders by implementing the research recommendations of the 2009 National Commission on Digestive Diseases. The bill grants the National Institutes of Health (NIH) authority through the National Institute of Diabetes and Digestive and Kidney Diseases (NIDDK) authority to bolster and coordinate research in this area and creates new opportunities for the NIH and NIDDK to partner with the Department of Defense (DoD) and the Department of Veterans Affairs (VA) to increase research activities. Read the text of the bill.

2016 SENATE RECOGNITION OF NATIONAL GASTROPARESIS AWARENESS MONTH
SENATOR TAMMY BALDWIN (WI)
In recognition of the need to improve awareness an care for people with gastroparesis, Senator Tammy Baldwin (WI) endtered a Statement for the Record in the US Senate urging her colleagues to support Gastroparesis Awareness Month and its inclusion on the HHS National Health Observances Calendar. 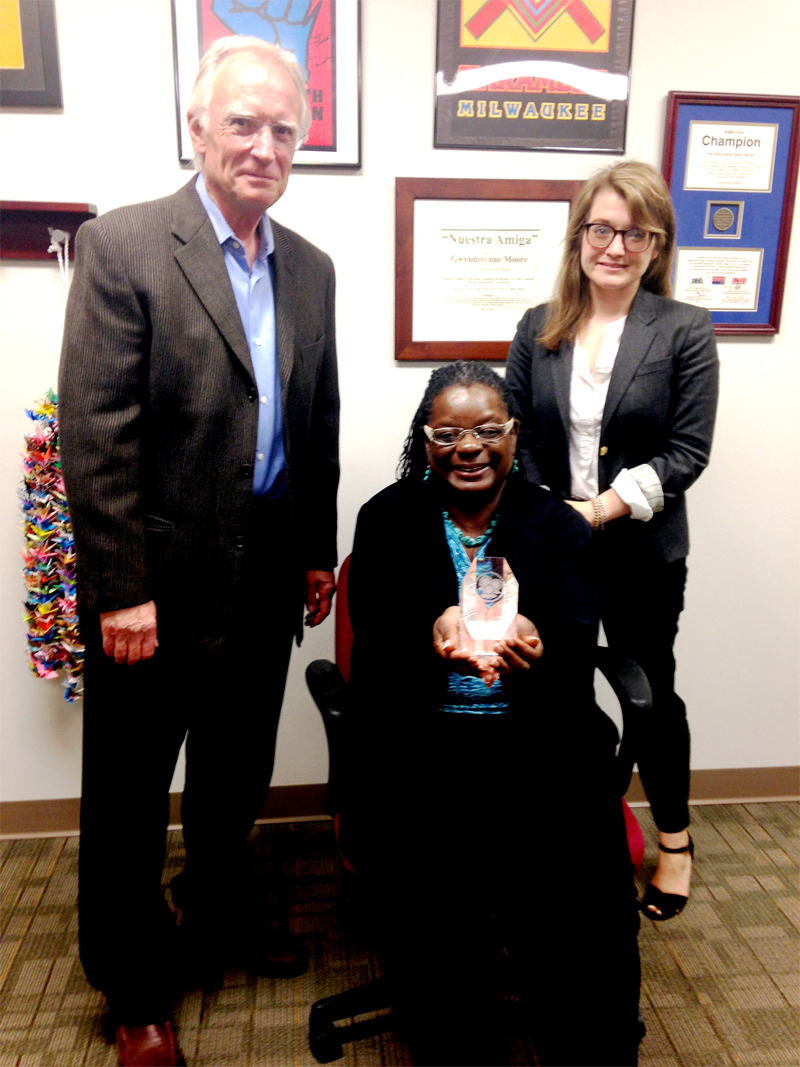 2015 IFFGD CONGRESSIONAL CHAMPION:
CONGRESSWOMAN GWEN MOORE (D-WI-4TH)
In support of all those affected by a functional GI or motility disorder, Congresswoman Moore has been a steadfast supporter of The Functional Gastrointestinal and Motility Disorders Research Enhancement Act. Most recently, Congresswoman Moore spoke out on behalf of the people affected by gastroparesis living in her district and across America, entering a Statement for the Congressional Record in the US House of Representatives urging her colleagues to recognize August as National Gastroparesis Awareness Month in an effort to improve our understanding and awareness of this condition, as well as support increased research for effective treatments of people affected by the condition.

2015: HOUSE OF REPRESENTATIVES BILL 2311
The Functional Gastrointestinal and Motility Disorders Research Enhancement Act was reintroduced in the U.S. House of Representatives in 2015 as H.R. 2311 by Congressman Sensenbrenner. This critical piece of legislation seeks to advance our scientific understanding of functional GI and motility disorders (FGIMDs) and improve treatment options for patients by encouraging and bolstering research. This bill calls on NIH to adopt and implement the FGIMDs-related research recommendations outlined by the National Commission on Digestive Diseases. In addition, this bill calls on NIH to partner with the Department of Defense (DOD) and the Department of Veterans Affairs (VA) to increase research activities.

2014 IFFGD CONGRESSIONAL CHAMPION:
CONGRESSMAN JAMES MORAN (D-VA-8TH)
For his long time support of the functional GI and motility disorders community, Congressman Moran was honored with the IFFGD Congressional Leadership Award. Congressman Moran co-introduced The Functional Gastrointestinal and Motility Disorders Research Enhancement Act with Congressman F. James Sensenbrenner in the 113th Congress and cosponsored the bill in the 112th Congress. Additionally, in recognition of IBS Awareness Month, Congressman Moran entered a Statement for the Record to the US House of Representatives urging his colleagues to support research efforts and awareness on behalf of all those affected by IBS, including children and veterans.

Congressman Moran retired from the House of Representatives in 2015. We thank him for his service.

2013: HOUSE OF REPRESENTATIVES BILL 842
The Functional Gastrointestinal and Motility Disorders Research Enhancement Act was reintroduced in the U.S. House of Representatives in 2013 as H.R. 842 by Congressmen Sensenbrenner and Moran. This critical piece of legislation seeks to advance our scientific understanding of functional GI and motility disorders (FGIMDs) and improve treatment options for patients by encouraging and bolstering research. This bill calls on NIH to adopt and implement the FGIMDs-related research recommendations outlined by the National Commission on Digestive Diseases. In addition, this bill calls on NIH to partner with the Department of Defense (DOD) and the Department of Veterans Affairs (VA) to increase research activities. 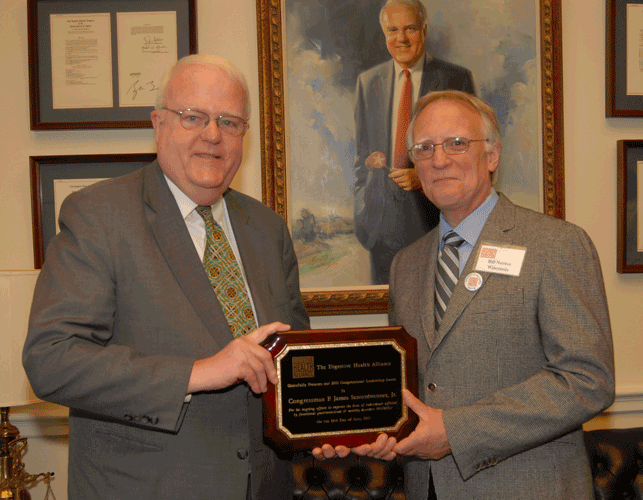 2011 IFFGD CONGRESSIONAL CHAMPION:
F. JAMES SENSENBRENNER, JR. (R-WI-5TH)
Congressman Sensenbrenner, along with Congressman James Moran (D-VA-8) introduced the bipartisan Functional Gastrointestinal and Motility Disorders Research Enhancement Act (H.R. 2239) in the U.S. House of Representatives. This landmark legislation seeks to expand the federal commitment to FGIMDs research while calling on regulators to improve the review, approval, and oversight of treatments for FGIMDs. It is only fitting that Congressman Sensenbrenner would take the lead on H.R. 2239, due to the fact that he has long been an active supporter of the FGIMDs community in Congress.

2010: HOUSE RESOLUTION 1309
Despite the prevalence of IBS along with other functional GI disorders and the tireless outreach of the IFFGD, many lawmakers remain unaware of the conditions and the unique challenges faced by the patient community. Introduction of the Congressional Resolution raised the profile of functional GI disorders on Capitol Hill and informed legislators of the issues impacting patients.

In 2010, Congresswoman Tammy Baldwin (D-WI-2nd) and Congressman F. James Sensenbrenner, Jr. (R-WI-5th) introduced a bipartisan congressional resolution to call attention to the need for increasing support for research into functional gastrointestinal disorders, House Resolution 1309 (H.Res. 1309). In addition to requesting that the National Institutes of Health (NIH) bolster research activities in this area, the Resolution also served as a means to raise awareness of functional gastrointestinal disorders amongst members of congress. Advocates from across the country urged their House Representatives to cosponsor H.Res. 1309 and in just a few short months the measure gained over a dozen cosponsors; sending a clear message to elected officials that these conditions must be a considered a federal priority moving forward. 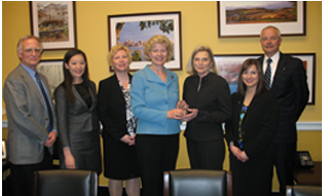 2010 IFFGD CONGRESSIONAL CHAMPION:
CONGRESSWOMAN TAMMY BALDWIN (D-WI-2ND)
Congresswoman Baldwin was one of the lead sponsors of House Resolution 1309 (H.Res. 1309), the bipartisan measure to raise awareness of FGIMDs on Capitol Hill in the 111th Congress. H.Res. 1309 educated legislators about FGIMDs and encouraged NIH to bolster research in this area. Congresswoman Baldwin has also championed women’s health issues, including GI issues through her role on the House Energy and Commerce Committee’s Health Subcommittee.

Congresswoman Baldwin was elected to serve as a Wisconsin Senator in 2013. We wish Senator Baldwin well and look forward to working with her in the Senate.

EXPANSION OF THE FGIMD RESEARCH PORTFOLIO AT NIH
Each year advocates encourage Members of Congress to increase funding for NIH and to support bolstering NIH’s functional gastrointestinal and motility disorders (FGIMDs) research portfolio. In recent years the FGIMDs research portfolio at NIH has grown to roughly $20 million annually, facilitating many critical new research projects, like the multi-year multi-million dollar Gastroparesis Clinical Research Consortium. Much more can be done though as research portfolios of well over $100 million, which result from sustained advocacy and outreach, are common. 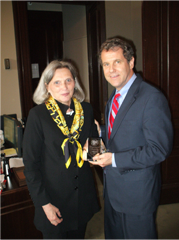 2009 IFFGD CONGRESSIONAL CHAMPION:
SENATOR SHERROD BROWN (D-OH)
Senator Brown is the lead sponsor of the Pediatric Research Consortium Establishment Act in the Senate. This bill would bolster pediatric medical research by establishing up to 20 federally supported pediatric research consortia and funding them at up to $2.5 million annually. In addition to his leadership on pediatric medical research, Senator Brown is also a constant champion of funding increases for NIH through his position on the Senate Appropriations Committee.

FDA GUIDANCE ON IBS TREATMENTS
For years, industry has been reluctant to develop new treatment options for irritable bowel syndrome (IBS) due to unclear regulatory standards and policies surrounding these products. Advocates encouraged lawmakers, particularly lawmakers with jurisdiction over FDA, to request that the agency clarify the regulatory framework around IBS so that new products can be brought to market. Recently, FDA initiated a comprehensive effort in coordination with patient advocacy organizations to address this issue and improve approval and oversight of innovative treatments for IBS.

GENETIC INFORMATION NONDISCRIMINATION ACT
In 2008, Congress passed and the President signed into law the Genetic Information Nondiscrimination Act (GINA). The enactment of this legislation was the culmination of nearly a decade of continuous advocacy by the broad public health community. This landmark piece of legislation improves health outcomes by making it illegal for employers and insurers to use the results of genetic testing to discriminate against the individual who received the test. 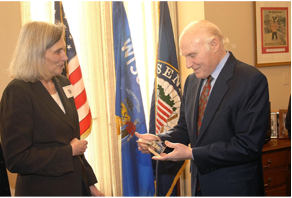 2008 IFFGD CONGRESSIONAL CHAMPION:
SENATOR HERB KOHL (D-WI)
As Chair of the Senate Appropriations Committee’s Agriculture and Rural Development Subcommittee, Senator Kohl has championed the effort to increase funding for the Food and Drug Administration (FDA). Additional resources for the FDA mean the agency can more quickly and effectively approve and regulate innovative treatment options. In addition, Senator Kohl is Chair of the Special Committee on Aging and through this position has worked to improve health outcomes for individuals with bowel incontinence.

Senator Kohl retired from the Senate in 2013. We thank him for his service.